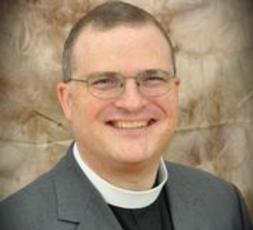 Reverend Michael Delk,Rector  rector@stlukesanchorage.org
The Reverend Michael L. Delk, a native Kentuckian, arrived at St. Luke’s on July 20th, 2014, after twelve years of service as Rector of Hickory Neck Episcopal Church in Toano, Virginia. Prior to that, he served for three years as Canon for Youth, Young Adults, and Communications at The Cathedral of St. Philip in Atlanta, Georgia, and for two years as Assistant to the Rector at Good Shepherd Episcopal Church in Lexington, Kentucky.

He took a Bachelor’s degree in Religion with Honors from Transylvania University in 1994 and a Master’s of Divinity with Honor in 1997 from Virginia Theological Seminary.

Father Michael enjoys basketball, travel, reading, and spending time with his wife, Stephanie, and their children, Ben and Emma.